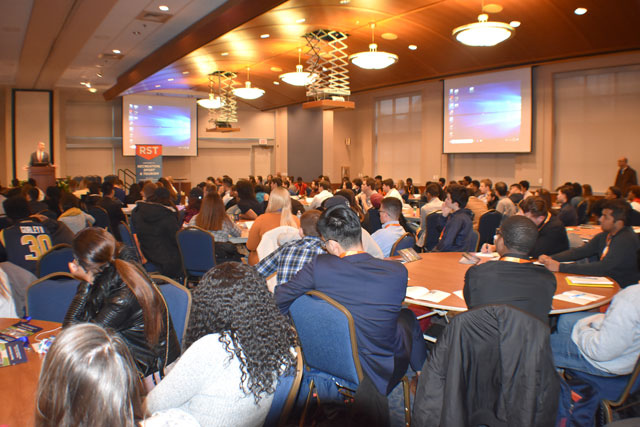 Along with Illini football and Halloween, the annual Sapora Symposium is one of the highlights of the fall semester for RST students, faculty, and alumni.  This year’s event will take place on November 14th and 15th in the Colonnades Club at Memorial Stadium. With more than 350 students attending and a lineup of top speakers, this year’s event is slated to be the biggest and best ever.  It is sure to be informative and entertaining, and a great highlight of our students’ experience at Illinois.

In celebration of the 150th anniversary of College Football and the 100th anniversary of the NFL, the feature panel for the afternoon session on Thursday, November 14th. at Memorial Stadium is titled “Red Grange and His impact on Sport and Culture in the United States, 1924 -1989.”  The panel features some of the foremost experts and scholars on Red Grange, including:

On Friday, November 15th, invited speakers who are leaders in their field will speak about current issues, trends, and future growth in recreation, sport, and tourism. Speakers include Carmen Rossi (founder of the Chicago-based company, 8 Hospitality Group), Melissa Luebbe (publisher of Midwest Living Magazine), Deon Thomas (former American-Israeli basketball player, Illinois Mr. Basketball, and the all-time leading scorer in Fighting Illini history), and Dr. Alan Nathan (professor emeritus of the University of Illinois Physics Department) who will provide fascinating insight into the physics involved in baseball.

The Sapora Symposium was created and developed by the alumni advisory board of the Department of Recreation, Sport and Tourism in honor of the Department’s founder, Dr. Allen Sapora. Dr. Sapora was a cornerstone to the education and careers of many of our alumni. He believed in mentoring younger generations and in providing them with critical connections to professionals in the field. Our alumni continue this long-held RST tradition by sharing their knowledge and experiences, and by providing professional networking opportunities for students to help them in their academic studies and future professional careers.

(Return to the RST Fall 2019 Newsletter)