The quantity and quality of interactions between parents and children are critical in early language development. Research has shown that the more language-rich interactions children have with their parents, the faster they learn words and the better they understand them. The quality of the interaction is also important, especially in terms of the responsiveness to children's attempts to communicate.

Language interventionists have typically relied upon three main language modeling strategies when working with parents to increase their responsiveness. The rest, responsive labeling, occurs when the parent labels an object that the child is playing with, saying, for example, “That’s a baby.” In self-talk, parents describe their own actions with the toy, for example, “I’m rocking the baby.” Parallel talk involves the parent describing the child’s actions with the toy, for example, “You’re feeding the baby.” Research has shown that these language modeling strategies lead to increases in the vocabulary used by toddlers and the length of sentences they produce. Dr. Pamela Hadley and Dr. Matthew Rispoli, associate professors in the Department of Speech and Hearing Science, were concerned that the language modeling strategies did not do enough to increase toddlers’ development of syntax, or the way words are combined to form sentences.

“These strategies—responsive labeling, self-talk, and parallel talk—actually reduce the diversity of the words in the input to the child, especially in the number of different words that appear as sentence subjects,” Dr. Hadley said. “They promote pronoun subjects such as it, that, you, and I to the exclusion of vast numbers of possible noun subjects.”

To increase the number of different words appearing as sentence subjects during interactions with children, Drs. Hadley and Rispoli designed a new language modeling strategy they call toy talk. The strategy shifts parent-child talk during play from the interpersonal space, or what the parent and child are doing, to descriptive talk about the toy itself, such as its location, properties, or actions in the play environment. Parents also are taught to give the object its name. 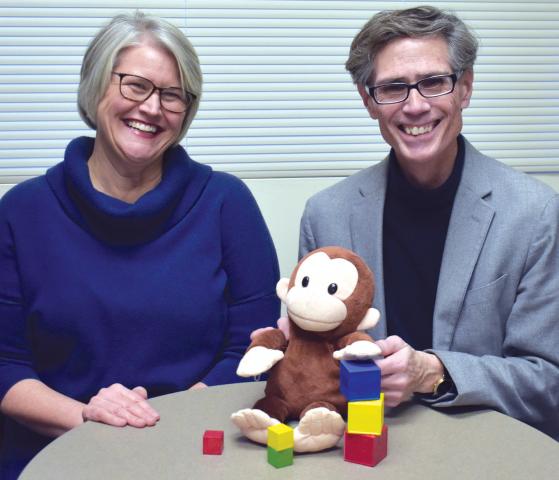 “Consider a child holding a bottle to a doll’s mouth,” Dr. Hadley said. “Instead of responding with ‘That’s a bottle,’ which is labeling, or ‘You’re feeding the baby,’ which is parallel talk, the parent could say, ‘The baby likes her juice’ or ‘The juice is gone.’ That’s toy talk.” Both toy talk sentences have noun subjects rather than pronouns, a subtle shift, she notes, but one that creates opportunities for parents to produce more diverse sentences.

It sounds simple but, perhaps surprisingly, toy talk sentences with nouns in the subject position are rare in naturally-occurring conversations between adults and young children, Dr. Rispoli noted. “It is much more common for adults to ask children questions—‘Are you feeding the baby?’—or to direct their behavior—‘Give the baby more juice’—or to make descriptive statements using pronoun subjects—‘It’s all gone,’” he said.

The challenge of language acquisition has been described as putting words together. “But maybe the challenge is pulling words apart,” he said. “When children consistently hear phrases such as ‘It’s a doll,’ ‘That’s a horse,’ and so on, the subject and the verb get chunked together. The child may not understand that ‘itsa’ and ‘thatsa’ are actually three separate words.”

With funding from the National Institute of Child Health and Human Development, Drs. Hadley and Rispoli evaluated the effectiveness of toy talk in a study that taught parents of toddlers how to use toy talk in both group and individualized coaching sessions over a three-month period. Their study demonstrated that not only did parents’ use of toy talk sentences increase following the instruction but also that their use of toy talk predicted children’s rate of growth in the production of diverse simple sentences and other crucial elements of syntactic development over the following six months.

“We think toy talk works, in part, because the diversity of noun subjects in parents’ input makes it easier for children to identify the boundary between a subject and a verb,” Dr. Hadley said. She and Dr. Rispoli emphasized that toy talk is not a replacement for other language modeling strategies. “Rather, it should be integrated with other strategies to interpret and expand children’s communication attempts and to model diverse combinations of words within simple sentence structure,” she said.

Because toy talk represents a relatively minor modification of familiar language modeling strategies, both scholars believe it can be incorporated rapidly into existing clinical practice.